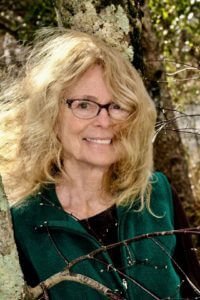 I grew up on the sidewalks of New York City and in the green WILDS of New Jersey. My father was a playwright and a constant learner and my mother was an intuitively wonderful cook who always used fresh ingredients, hardly ever referring to a cookbook (note! she did not like baking so rarely did it).

The seeds from both my parents’ interests grew into my life interests that more fully blossomed when I moved from New York and had both land and children. I had vivid memories of the loamy smells of the composting leaves that my father and I dug into our long vegetable garden; the rich taste filling my mouth of a freshly picked tomato sprinkled with salt; the sight of the colorful jars of food that my mother processed when I was little. As my organic garden grew from an initial small patch to the size that fed my family year round from the freezing and canning of the summer’s excess, I became more deeply involved in understanding the role that the natural systems play in a healthy environment. All of this laid the foundation for my studying the composition and biology of soils; the techniques for growing food without synthetic fertilizers and harmful pesticides; researching and choosing the best available foods and how to prepare them; the essential role that pollinators fill in the environment; and my fascination for how all life depends on an interacting and interdependent system of diverse layers.

I became more deeply involved in studying and understanding what is necessary in a broad sense for the sustainability and regeneration of our natural ecosystems.  Biodiversity of species – flora and fauna – is the foundation and a vital key to the sustainability of those systems and to the ability to constantly regenerate support of native species habitats. My passion is now focused on the vital creation of native plant systems that will support and eventually stop the drastic decline of our native pollinators around the world. All of my experience in the areas of environmental impacts, community engagement, and political involvement is brought to bear on these issues.

Teaching about and designing any size beautiful native garden habitats as actions to provide native pollinator habitats that can immediately be taken to reduce the 40 million acres of lawn grass–is the expertise that I share in many types of venues. They include local libraries, schools, colleges, corporations, and public and private organizations. My professional experience as an actor and theater director has given me the ability to craft an approach that connects with an audience when doing the public presentations I have delivered on a range of environmental subjects.

My acting career began as a very young person. This continued through my high school years with acting in many professional summer theater productions and finally– to studying at the Neighborhood Playhouse School of the Theatre. I was so very fortunate to have teachers and mentors there such as Sanford Meisner for acting and Martha Graham for dancing. From there straight to Broadway to be directed by Elia Kazan in a play by William Inge; touring opposite Sammy Davis, Jr., and in many other productions; appearing in many television shows including two years as a main character in “The Guiding Light”; a number of Off-Broadway productions; and several independent films; and co-creating and performing in “The Haunting of Lady MacBeth” and a one woman show “Open Windows”. Having studied with Lee Strasberg, it was a wonderful opportunity to teach and direct productions at the Lee Strasberg Theatre and Film Institute in New York and as a drama teacher/director for NYU’S Tisch School of the Arts.

I love communicating the joy of learning about the incredible complexity of the world around us and to teach the tools of stewardship. I believe in the practicality and effectiveness of actions.